If you have an .img file on your Garmin GPS device and you want to view the same map in BaseCamp, there’s a way of loading it in without any complex conversion utilities. The map will also load in BaseCamp just as quickly as if it was installed on your machine. These instructions are for Windows and assume your .img file isn’t locked and doesn’t require authentication to view.

At this point you should be able to view the map in BaseCamp. However, you will find that if you restart your computer, the virtual disk you created will disappear. To save you from having to repeat the steps above to recreate the virtual disk, you can create a snapshot of the disk so that you can load it quickly in the future.

To create a snapshot of your virtual disk:

To quickly recreate the virtual disk after a shutdown or restart:

In this post I reference methods in the Selenium C# client driver. Equivalent methods should exist in whichever other language client driver you use.

Some testing requires opening a new window, performing an action, then closing that window, perhaps even returning to the original window to continue the test. There are many, many ways of managing tabs in selenium, so lets take a look at what works and what doesn’t.

First of all, Selenium really has no concept of what a tab is and how it differs from a window. Each WebDriver instance has a reference to it’s current window handler, which is points to the current tab or window that driver is interacting with. When managing tabs, we have to be able to create a window handler, switch to it, do some stuff, then switch back to our original window handler.

There are many ways of opening a new tab. You could do it by clicking a link, using a keyboard shortcut, initializing a new WebDriver instance, or even typing some JavaScript into the developer console. Unfortunately not all of these methods are reliable in Selenium. For instance, having the WebDriver send the keyboard command “Ctrl + T” would open a new tab when testing locally on my machine, but when running the test using Selenium Remote Server, the keyboard command would be ignored entirely. There are also known bugs related to sending keyboard shortcuts through the WebDriver, some dating as far back as 2012. Initializing a new WebDriver works, but is quite resource intensive and requires having to keep track of the state of multiple WebDriver instances. Clicking a link is also somewhat unreliable since Selenium doesn’t handle links using target="_blank".

The most reliable method I have found is to create your tabs using JavaScript. This is done by simply executing a window.open().

So now you have a new tab in your browser, but you still need to tell your WebDriver to switch to it, otherwise commands will continue to be sent to the original tab. This is actually pretty easy and is done using the SwitchTo() command into which you pass the window handler that you want to switch to.

So putting everything together, here is what the code would look like to:

This approach works when executing tests both locally and remotely. Keep in mind that you can only execute a window.close() on a tab that was initially opened using a window.open().

Not all Android libraries out there provide a Maven dependency to include it into your project. Sometimes you will just have to resort to the original method of just including the source code in your project.

For this example, I will be importing the SlidingMenu library for Android by Jeremy Feinstein.

First of all, allow me to illustrate the folder structure of your entire project: 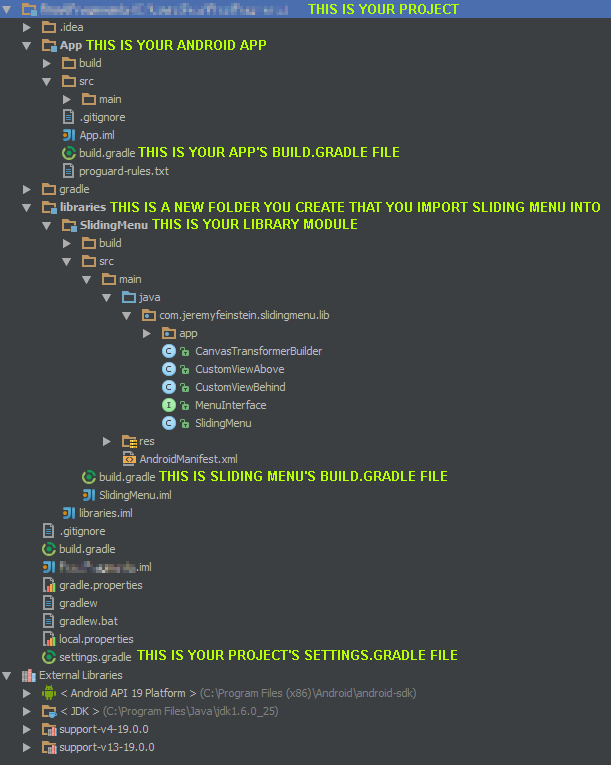 Next, based on the naming conventions I established in the image above ensure you have the following:

In your APP’s build.gradle file make sure you have:

This tells Gradle that your App has a dependency on SlidingMenu.

In SLIDING MENU’s build.gradle file make sure it has the following:

This tells Gradle how to compile and build the Sliding Menu module. We’re telling it that Sliding Menu depends on the Android V4 Support library, the SDK version target to build against, and finally, the folders paths where the source code, resources, and manifest files are located.

This tells Gradle the modules it should build for your entire project, and the order to do it in. Obviously we want to build Sliding Menu before we build our app, because Sliding Menu is a dependency and it expects it  to be already compiled.

In android studio press the Tools -> Android -> Sync Project with Gradle Files button, then rebuild your project. If all went well you should be able to import the com.jeremyfeinstein.slidingmenu.lib.SlidingMenu library into your app’s source files.

Suppose we have a custom filter defined as follows:

There’s a new way of registering MVC global filters using AutoFac. First, remove the filter registration from your RegisterGlobalFilters because we will have Autofac handle adding them to our controllers/actions instead of MVC.

Then, register your container as follows:

Note that by passing in the Controller class into the extension AsActionFilterFor() we are telling AutoFac to apply this filter to all classes that derive from the Controller class (which, in MVC, is all controllers). Since we are calling AsActionFilterFor() without any arguments, we are also specifying we want to have the filter applied to all actions within the specified controllers. If you want to control the scope of your filter, such as applying it to a specific controller and action, you can use lambda expressions like so:

If your action takes a parameter, use the default keyword to specify:

Note that you have to use a different extension method based on what type of filter you are registering, here are the supported filter types:

A note to Android 2.2 (Froyo) users: please backup your stash prior to updating. There is a bug in your version of Android that will wipe your stash when updating the app. Please see the FAQ for instructions on how to backup Frost and this post for more details.

We just released update 2.5 for Frost. As I mentioned in our previous post, we focused on the browser interface for this release. Our goal was to eliminate clutter in the options menu, and we’ve achieved this by moving a lot of common browser actions to a quick action menu in the tab bar. In future updates we will be working towards eliminating the options menu entirely as more devices are released without any hardware menu buttons.

The next biggest change is the addition of tab sessions. From now on, whenever you log into your stash you will be prompted to restore the tabs from your previous private session. Note that in order for your tab session to be saved, you need to be logged into your stashes.

Finally, there are countless optimizations and bug fixes. We’ve fixed some compatibility issues with some websites like Gmail and Twitter, as well as changed the way batch operations are handled to improve reliability and performance.

Please don’t hesitate to contact us with feedback using the contact form at the top of the page.